Ulrich Haage (* 1970) belongs to one of the oldest gardening families who are still based in Erfurt, Thuringia. There is evidence that his ancestors had been active in this profession since 1685, which Ulrich Haage also learned.
During his traveling years he was not only active in the “Royal Botanic Gardens, Kew” in London, but also in the municipal succulents collection in Zurich, on the Canary Islands, in Belgium, Guatemala and in numerous nurseries in Germany. He successfully completed his studies in the field of horticulture and marketing.
Haage has been running the cactus nursery in Erfurt since 1996, now in the sixth generation, which will soon celebrate its 200th company anniversary. Under the direction of Ulrich Haage, the range of plants and accessories of the company was constantly expanded, and he pays special attention – similar to his grandfather Walther Haage – to the epiphytic cacti.
In 1997, Haage initiated the first cactus diner, a 5-course menu in which each course contains cacti as an ingredient. The cactus dinner is held every year in the greenhouses of Kakteen-Haage and is a great success.
Ulrich Haage has also been a blogger since 2005, produces his own videos and the CactusPodcast on the subject of cacti and other succulents, which are very popular with the public. 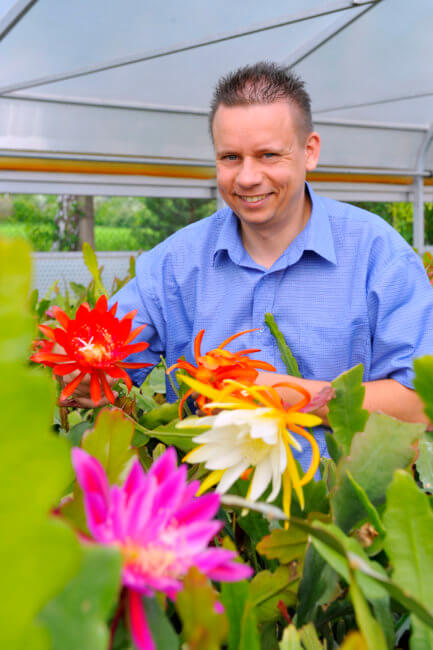